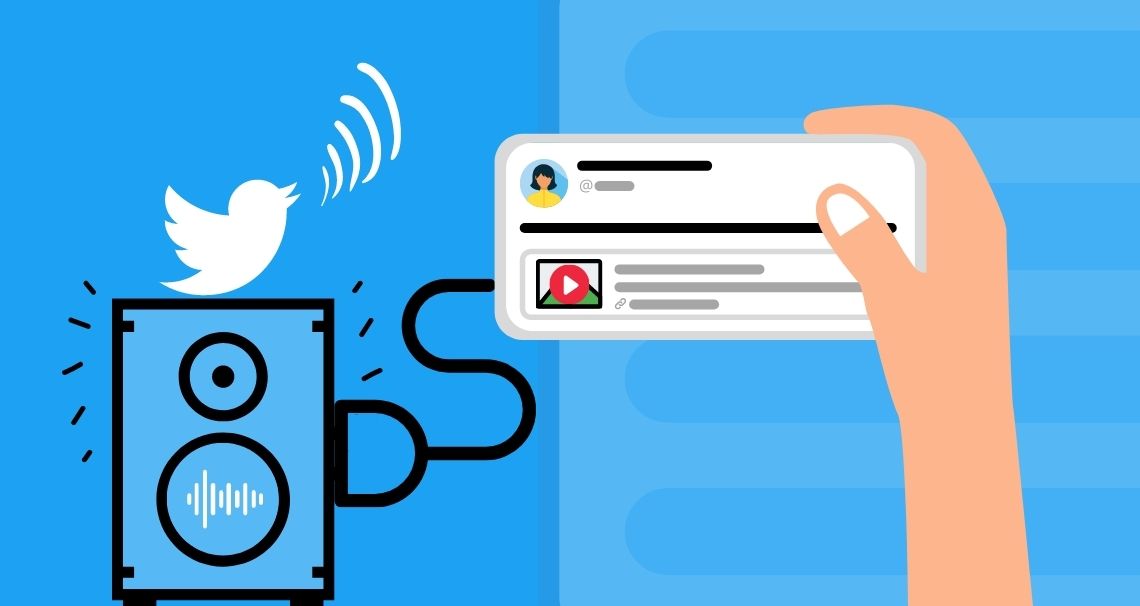 Twitter cards are in a sense what makes Twitter come alive, with images, videos and even opportunities to install apps.

Using them helps your Tweets to stand out and get attention, thereby helping to amplify your content and increase your engagement and reach.

Quite simply, without the use of Twitter cards, you’ll find it a lot more difficult to amplify your content on the platform.

So what types of Twitter cards are there, and how do you put them into action?

This post gives you everything you need to know to put Twitter cards into action for your own content. They’re easy to use and you’ll start seeing the benefits almost immediately. 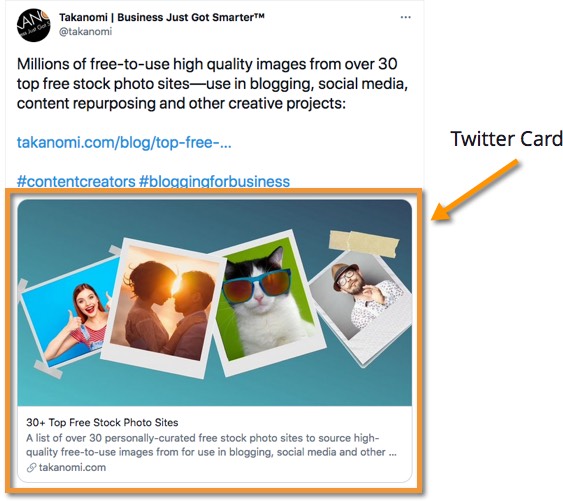 As you can see, the addition of the Twitter card makes the content a lot more visually appealing and engaging than it would be otherwise, while also taking up more screen real estate in the timeline.

But Twitter cards aren’t just for sharing basic links to web pages—though two different formats, or types of Twitter card, exist for doing so. More on that in a sec.

Twitter cards can also be used for sharing media like video and audio, and even for apps...

There are four different types of Twitter card as follows, each of which I’ll run through in turn: 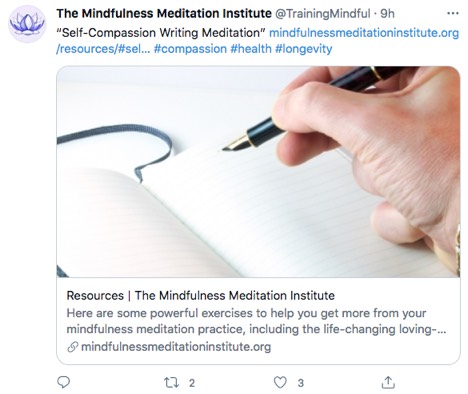 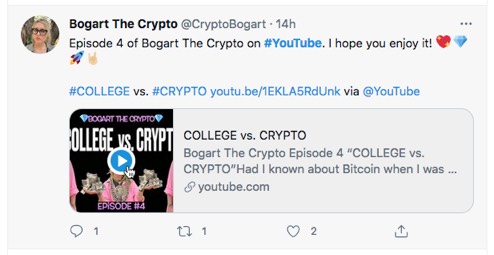 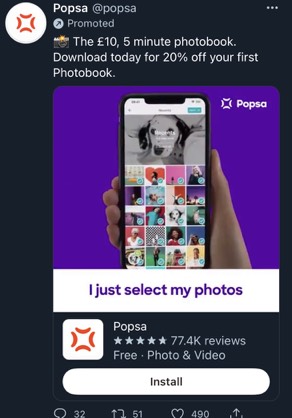 Let’s look at how to actually start putting Twitter cards into action...

In this section, for each card, I’ll give you the code you need to start using it.

They involve using special tags—known as social meta tags—that Twitter looks for to get the information it needs to populate the card.

Some of these tags are optional, and these are indicated below accordingly.

For some tags, if the tag has not been supplied, Twitter falls back on the equivalent Open Graph tag where there is one (Open Graph is a similar mechanism, used for other social sites like Facebook). This means you can avoid duplicating a lot of information in your code.

(Note this does not apply to either Twitter-specific tags (such as twitter:site) or App Cards).

Because of the small-sized image, it’s not as engaging and won’t amplify your content as well as the Summary Card with Large Image, detailed below.

For that reason, this type of card is used much less frequently than the Summary Card with Large Image, but you’ll still see it in action by some users.

Here’s an example from @JayVanHoutte.

You’ll notice the top tag, twitter:card, has been set to summary, denoting the type of card to use.

The full set of tags you need for a Summary Card are as follows (more details for each tag can be found below):

For this type of card, Twitter prefers square images, but will simply crop anything different in order to fit the format.

Putting this type of card (or the Summary Card with Large Image, below) into action on a site running on Wordpress is really straightforward.

First install the Yoast SEO plugin if you don’t already have it.

Once installed, click SEO then Social on the sidebar menu. 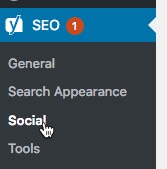 On the Accounts tab, enter your Twitter username if it’s not already there. 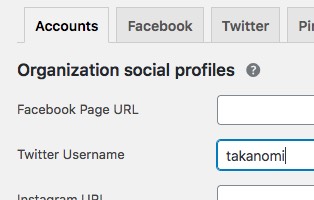 Click on the Twitter tab, and ensure the Add Twitter card meta data option is set to Enabled. Then choose which type of card to use, Summary or Summary with large image. 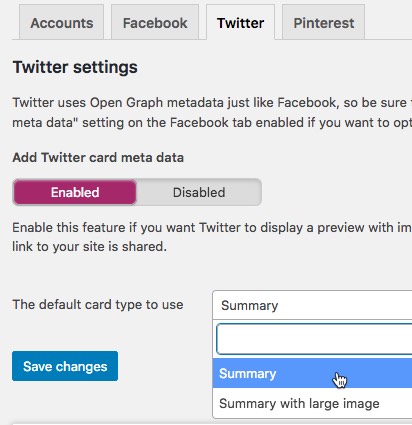 Yoast will then automatically fill in the relevant information for the Twitter card using the featured image for the post, along with the title and description.

You can change this if you wish for individual posts via the Social tab of Yoast. 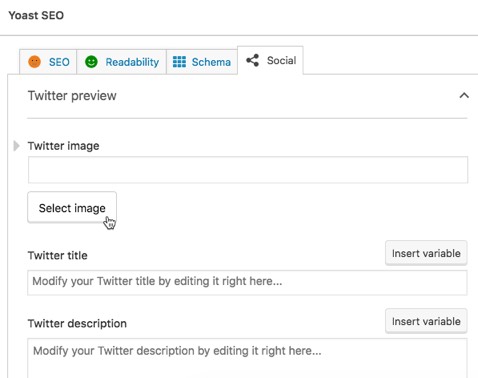 The larger image is shown at the top of the card, with the title, description and other information shown underneath.

As stated above, because this type of card generally attracts more engagement and is more effective at helping to amplify content, it’s the preferred option for most websites.

Here’s an example from an article on Entrepreneur.com. When someone shares the article on Twitter, it looks like the following. 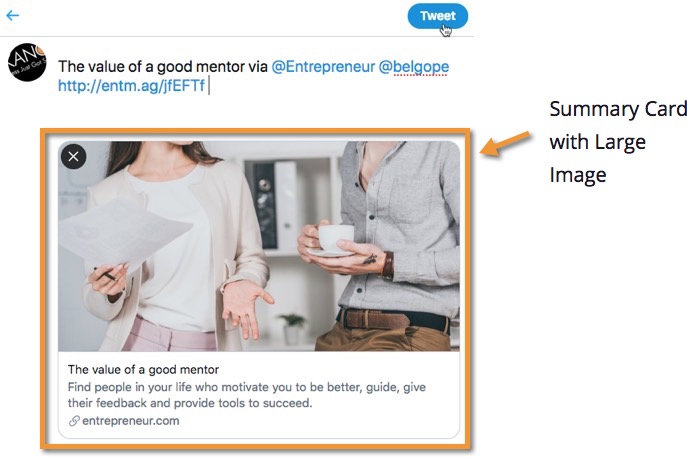 As you can see above, this time the twitter:card setting is set to summary_large_image.

The full set of tags you need for a Summary Card with Large Image are as follows (more details for each tag can be found below):

Note: as with the Summary Card, all but twitter:card and twitter:title are optional.

The ideal image for this card should be sized to have an aspect ratio of 2:1. However, if it doesn’t fit, Twitter will simply crop it to do so.

To put this into action for a Wordpress website, see the instructions above for the Summary Card, this time selecting the Summary with large image option instead.

Twitter’s Player Card is for sharing video, audio and other playable media hosted on external websites.

So it might be used to help amplify say a YouTube video, podcast audio—there’s an example of this below—or even a SlideShare presentation. 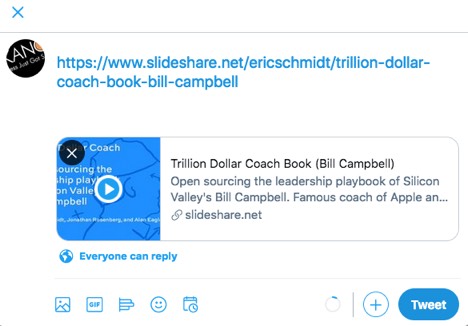 By using a Player Card, the player for the media is embedded within the Tweet, which users can then play and otherwise interact with rather than clicking through to an external website.

Here’s an example of how Spotify uses them to promote artists on their platform. 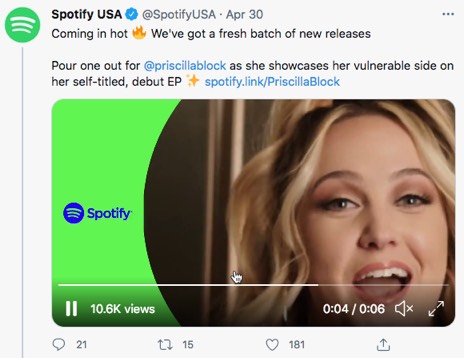 As an example of the code needed for a Player Card, here’s the code Spotify uses to embed the above player into Tweets:

So you generally won’t need to be concerned with the underlying tags that are required unless you are:

If so, the tags you need for Player Cards are as follows—the full details for each tag are available towards the end of this post:

Note: only twitter:description is optional.

To avoid any confusion, it should be noted that Player Cards appear in different formats depending on where the user is viewing the Tweet in question.

If you are seeing it via the Twitter app on an iPhone or Android device, it initially appears in the timeline as just a standard Tweet with a link, as in this example from @johnleedumas, tweeting a link to his podcast hosted on libsyn.com:

So it can be easy to assume that the Player Card isn’t working in some way. But this is just how it shows on mobile.

Tapping the Tweet reveals the card, initially expanding to show the thumbnail image (twitter:image) with a play icon on top, and a further tap opening the player and playing the media. 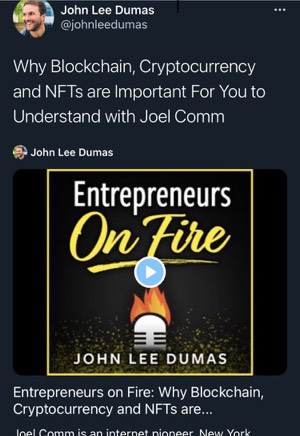 The thumbnail with the play icon are shown directly in the timeline, in a format resembling a Summary Card. Here’s an example from @MarcGuberti.

Clicking the Tweet expands it so that it then shows the player and starts to play the media. 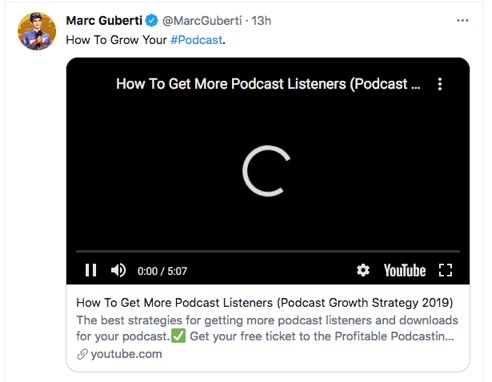 Finally, App Cards are designed for developers of mobile applications, enabling them to advertise their app, including an Install button shown in the Tweet.

They are less relevant for amplifying content, but I include the format briefly here in case you have an app related to your website that may in some way help to do so.

App Cards can be shown on desktop, but tend to be more common when using Twitter via their mobile app.

The data needed to display all the information in an App Card is retrieved directly from Google Play or the App Store. Your app therefore needs to be listed as public in order to make that data retrieval possible.

Here’s an example from @fastic of how an App Card might show up in the feed. 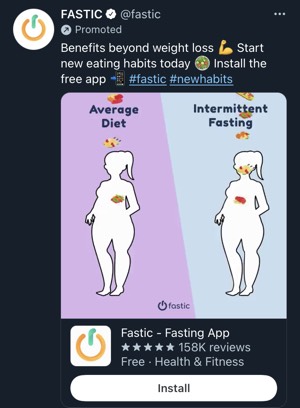 The tags you need for an App Card are as follows (based on sample code Twitter provides)—more details for each tag can be found below:

The following tags are for Player Cards only:

The following tags are for App Cards only:

After adding the relevant social meta tags to your page, you should now validate the card to ensure it’s displayed as you intend.

Twitter provides a Card validator to do just that—simply enter the URL of your web page and preview the card. 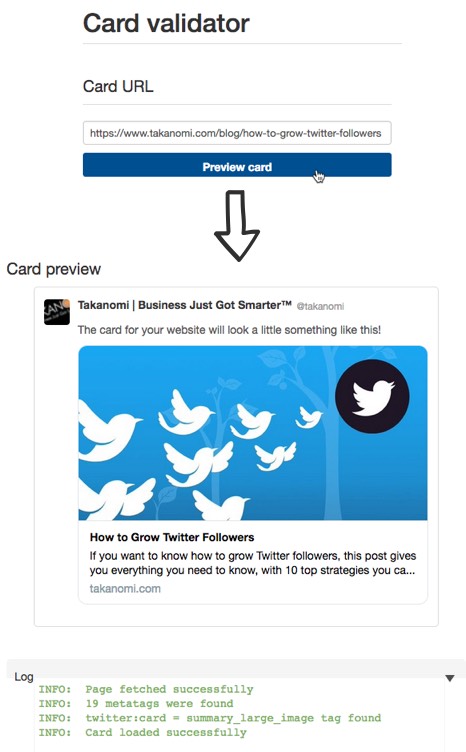 This post has given you everything you need on how to use Twitter cards and put them into action, including details on the four different types of card available.

For Wordpress sites, I’ve shown you an easy shortcut for using Summary and Summary with Large Image cards, but otherwise you have the full set of tags that you need and the different options available.

The use of Twitter cards is now essential for amplifying your content—use the information in this post to ensure you’re using them to their maximum potential. 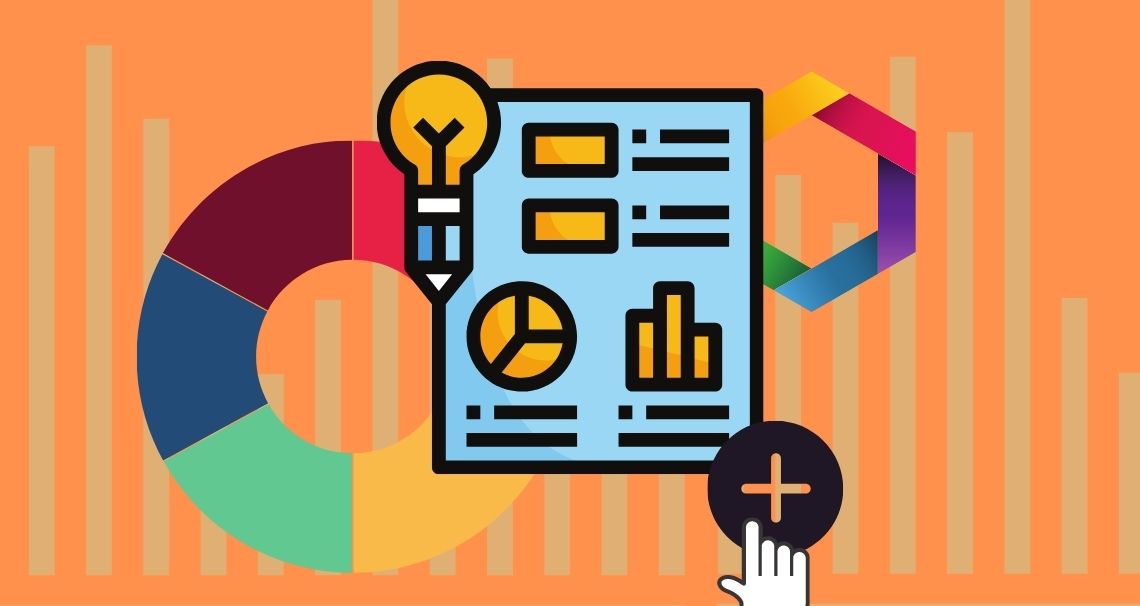 This post shares over 10 of the best tools available to create infographics online that are both effective and engaging. The infographics are created all through your browser—there's no need to download any software. For each tool, you'll even see an example of an infographic created by each one. You'll discover that creating a visually-appealing, quality infographic is a lot easier than you might think! 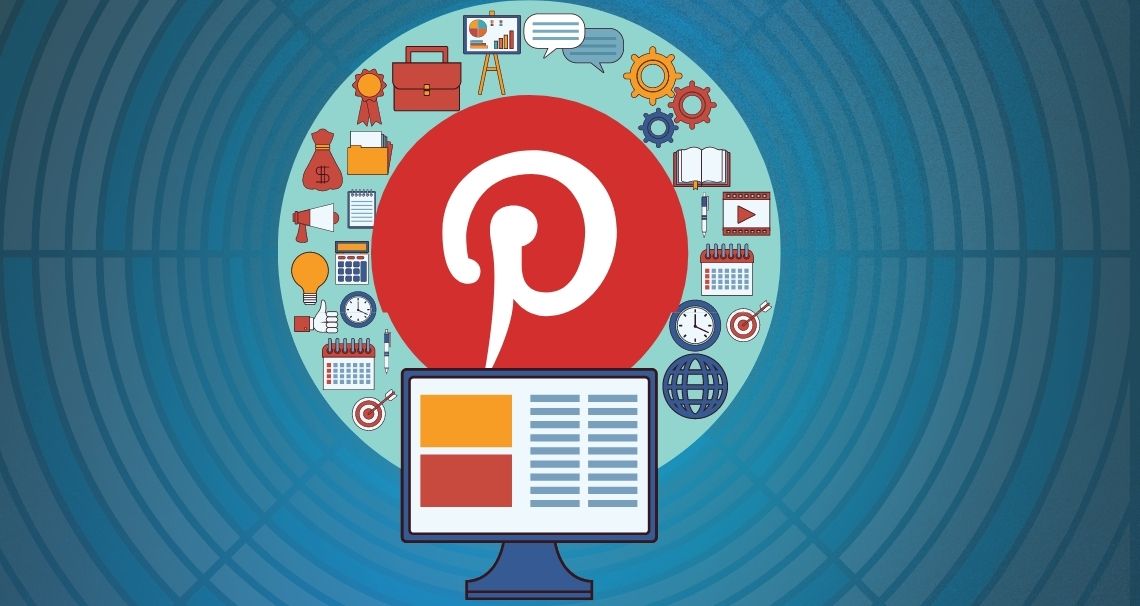 Are you interested in using Pinterest for marketing? Even if you're a complete beginner to the platform, this guide gives you the lowdown on everything you need to know, including: how to set up a Pinterest account, the benefits of using Pinterest to market your business, and top Pinterest marketing strategies you can put into action today... 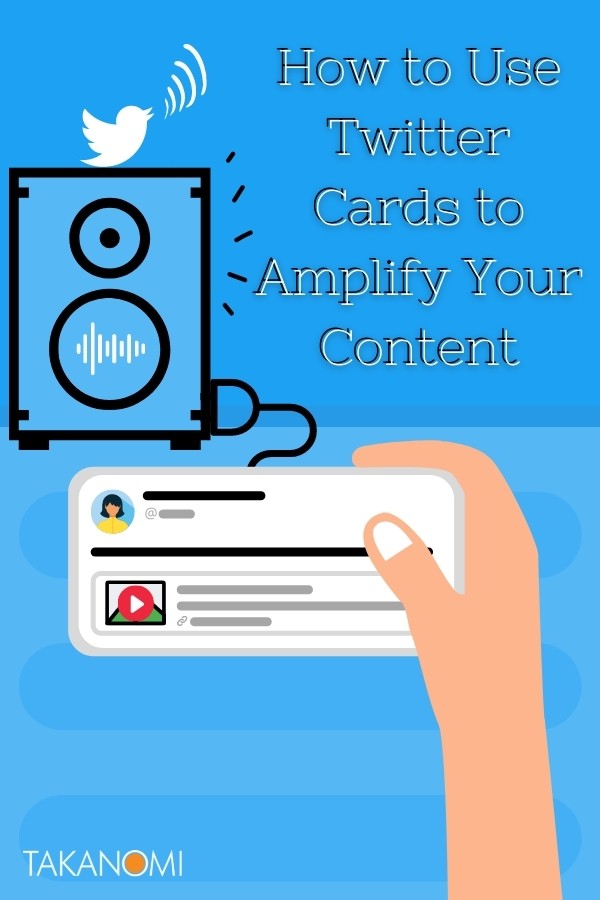 Save
Please note that the content on this blog is free because it's reader supported—some content contains links to third-party products and services for which we may receive a commission if clicked and a purchase made.

How to Grow Subscribers on YouTube
Google Ads: Responsive Search Ads and How to Use Them
How to Grow Pinterest Followers
7 Top Lead Magnet Tools for More Leads and Higher Conversions
How to Increase Organic Search Traffic
Drip Campaign Emails: How to Create an Effective Email Nurture Sequence
How to Use Reddit for Marketing
45+ Infographics Submission Sites to Promote Your Infographic
Email KPIs: Essential Email KPI Metrics to Keep Track Of
55+ Effective Call to Action Phrases That Convert