What Are the Best Days to Send Emails? 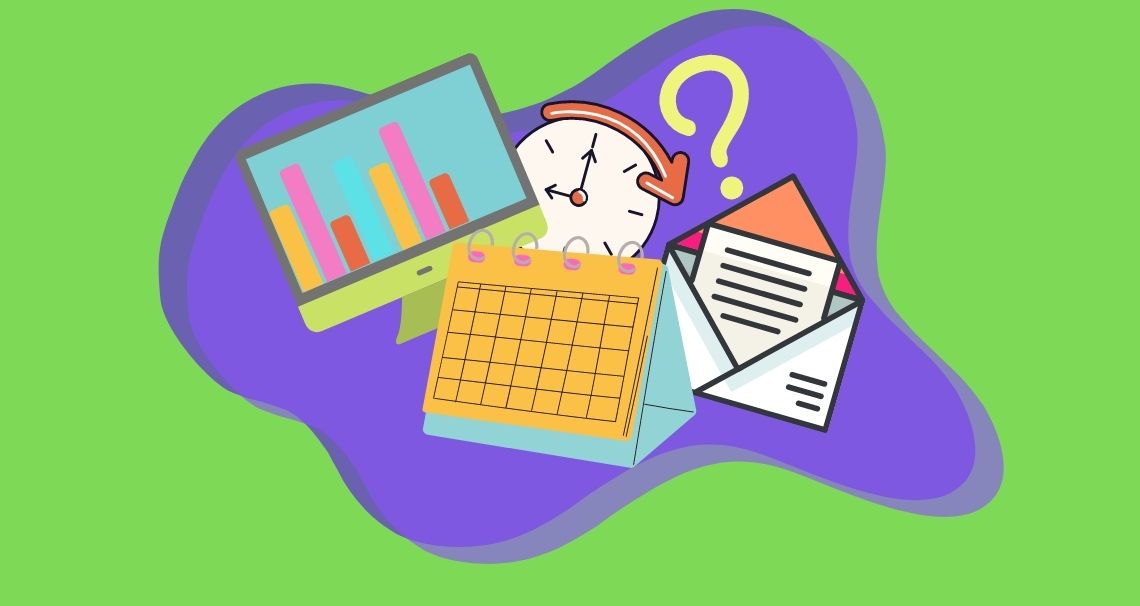 One of the most common questions of email marketers is this: What are the best days to send emails?

That’s exactly what this post attempts to answer, looking at studies from three leading email service providers, between them looking at data based on billions of emails.

In addition, we also look at the best times to send emails. As you’ll see below, that research is particularly conclusive.

It may appear at first glance that small differences in performance across key metrics won’t make that much difference to campaign performance. So why bother?

But for many businesses, any small increment in performance can mean significant additional revenue.

Even for small businesses with lists of say just a few thousand subscribers, sending emails on optimal days and at optimal times can build significant revenue increases across say a quarterly or 12-month period.

But first, what are we actually measuring? Let’s take a look at some...

Before trying to determine what days of the week are best for sending emails, we need to first determine which metrics we actually want to measure to compare one day with another.

Here are some of the most common email marketing metrics (also referred to as benchmarks or KPIs) that email marketers tend to keep an eye on, with a brief definition of each:

Out of these, the main metrics for determining the best days to send emails are the first three: the open rate, click-through rate, and click-to-open rate.

So let’s look into what the research tells us...

The most reliable information on which days are best for sending emails are likely to come from sources with large amounts of data on which to base their research.

Fortunately, three of the largest email service providers—GetResponse, HubSpot and MailChimp—have done some research into the topic, and their findings are summarized as follows.

GetResponse based their research on 4 billion emails, looking for information on which days were best for sending emails (based on the sender’s time zone), based on the three main metrics referred to above.

As shown in the chart below, there’s a distinct dip in open rate over the weekend, and a similar dip in the click-through rate. 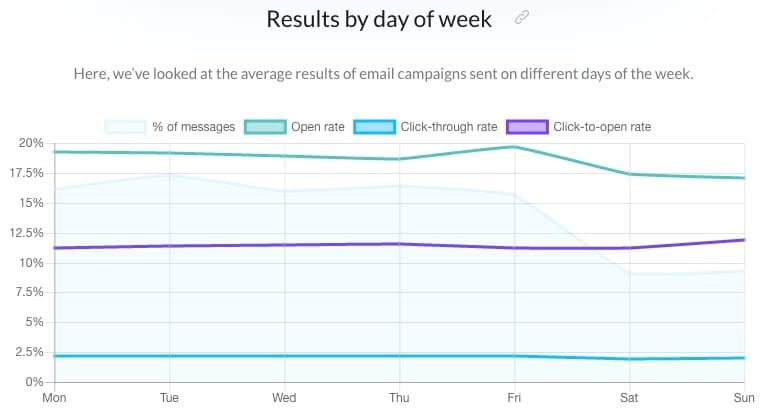 But what were the best days for sending emails? In summary:

The best days to send emails for your business really depends on what your goals are. Are you just looking for email opens, or do you want actual clicks?

Based on the research above, different days are optimal depending on your answer.

MailChimp also studied which days were best for sending emails, again based on billions of emails.

There are however clear differences in the study as compared to GetResponse, so it’s not possible to compare like with like. 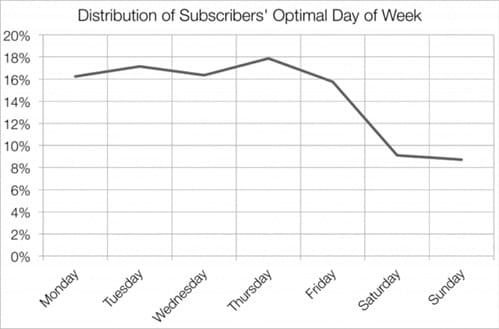 With those differences in mind, this study clearly shows that:

Just like other studies, MailChimp found Saturdays and Sundays are the worst days to send emails where open rates are concerned. They found Thursdays to be the optimal day, with Tuesdays in second place.

HubSpot did another piece of research, though this time on a smaller scale with 20 million emails, and focusing purely on how many emails were opened. 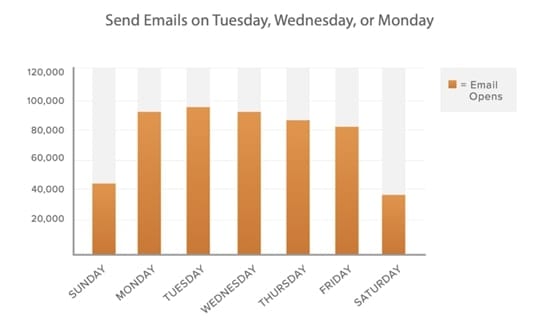 Although it would have been more helpful if they’d indicated how many emails were sent in order to discern the open rate as a percentage, in terms of email opens alone, it’s clear that:

And when you get to the weekend, each weekend day generally sees less than half the email open numbers of normal weekdays—of course, not too surprising

That’s just three such studies, though each are significant in terms of the number of emails analyzed.

While each shows a different result, the basis of each piece of research is different, so they don’t necessarily invalidate each other.

And remember too that what they show are averages. The studies don’t split results across industries, or indicate what differences exist for B2C and B2B businesses.

Even then, individual email lists can behave very differently to what generalized research purports to show.

So the best results may come from simply testing the engagement of your own list over time, gradually getting a feel for what days seem to attract the highest response.

That covers the best days to send emails, but...

What About the Best Times to Send Emails?

This question was also covered by research from the same email service providers referred to above.

For their study, they analyzed the same metrics as before: open rate, click-through rate, and click-to-open rate.

Rather than billions of emails, the research was based on over 2.85 million emails over the course of six months. Only small- to medium-sized businesses were looked at, with campaigns consisting of at least 1,000 contacts.

At face value, the research initially shows that 4am appears to be the best time for open rates—though only a small percentage of emails were sent out at that time, so the result is perhaps less reliable.

After that initial peak—and immediate trough—the open rate starts to rise from 5am, increasing steadily as more and more people come online.

They start to dip again at around 10am, presumably when people have finished running through their inboxes and get on with the main tasks of the day.

There’s then another rise at around 2pm, when people review their inboxes again after lunch, and apparently keep them under review for much of the afternoon, dipping from 5pm onwards as people finish for the day.

MailChimp’s study looked at the percentage of emails that were opened, depending on the time of day. 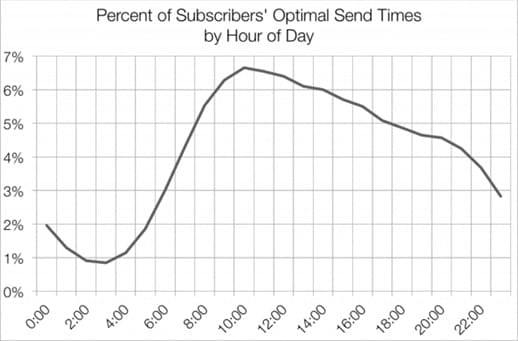 As with GetResponse’s research, open rates climb from early morning onwards, peaking at 10-11am.

However, whereas the previous study showed relatively consistent open rates through the afternoon, MailChimps research shows a steady drop-off all the way through until around 8pm, when rates decline more rapidly.

Finally, let’s take a look at what HubSpot’s research found.

As with their other research above, the study was based on data from 20 million emails.

Again, they found that the peak opening time was mid-morning, peaking at 11am. And you can see a similar drop-off throughout the afternoon, reflecting MailChimp’s findings, though a more marked drop-off for whatever reason between 4pm and 6pm.

Either way, it’s clear that mid-morning is one of the best times to send emails.

What Can We Conclude From All This Research?

The best time to send emails appears to be more conclusive than the research looking into the optimal days.

For the best days to send emails, it largely depends on what your goals are.

But even then, as previously stated, you need to test it for your own audience.

For example, a list of fitness enthusiasts are likely to have very different optimal days and times as compared to a list of new or expectant mothers.

And then remember that the day and time your emails are sent are just one factor for a successful campaign. They are far from the be-all and end-all.

Depending on your goals, that may include open rates, which is what most email marketers tend to focus on. But don’t forget about the other metrics discussed at the beginning: your click-through and click-to-open rates.

Test different approaches to try to improve your results, looking at what resonates best with your list. 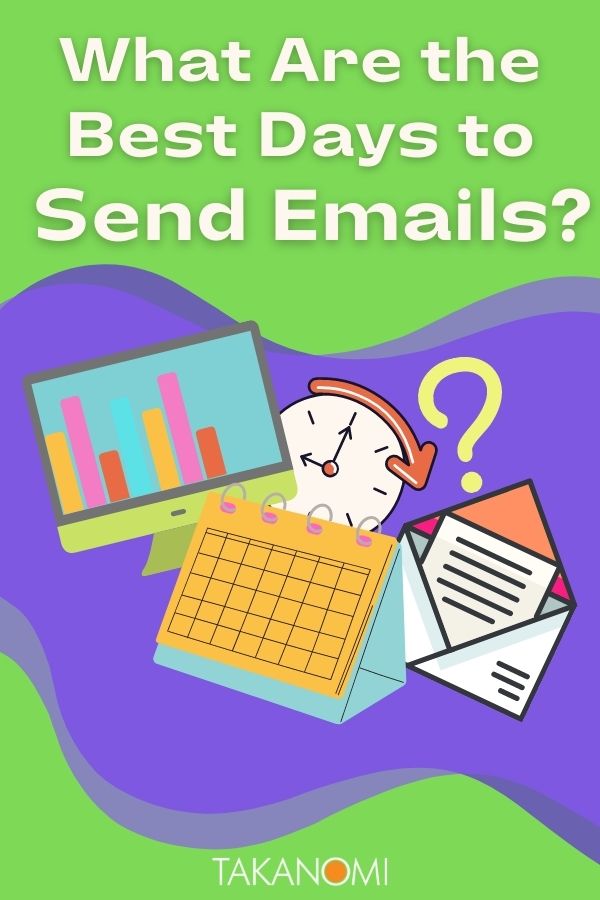 Stephen D Shaw is the founder of the content amplification and repurposing platform, Trafficonomy—repurpose and amplify content across the web, growing your traffic and leads 24/7. For more info, click here. 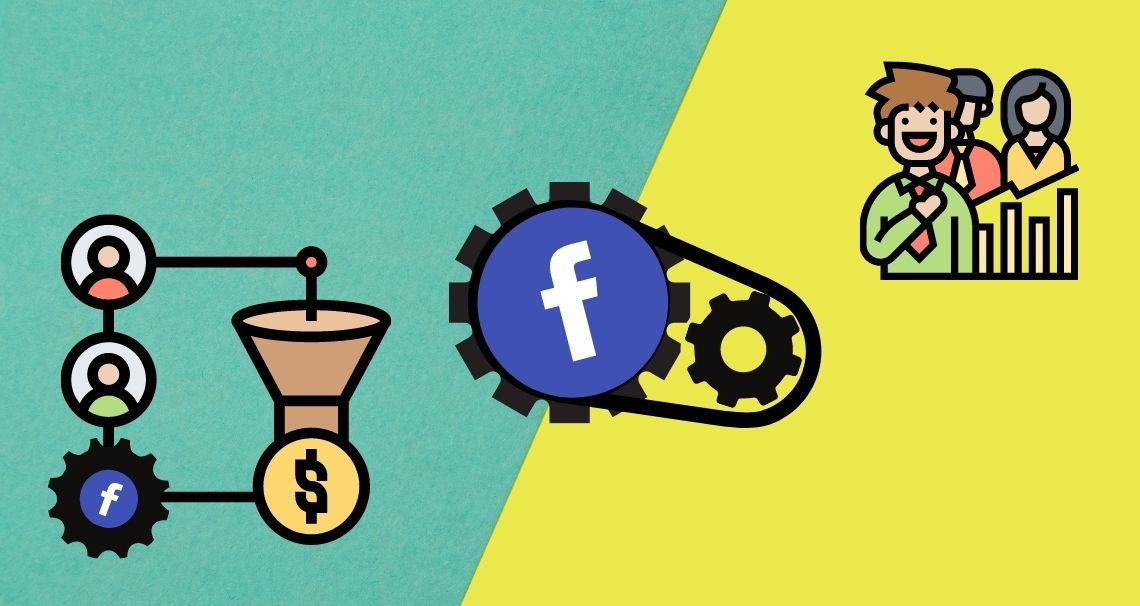 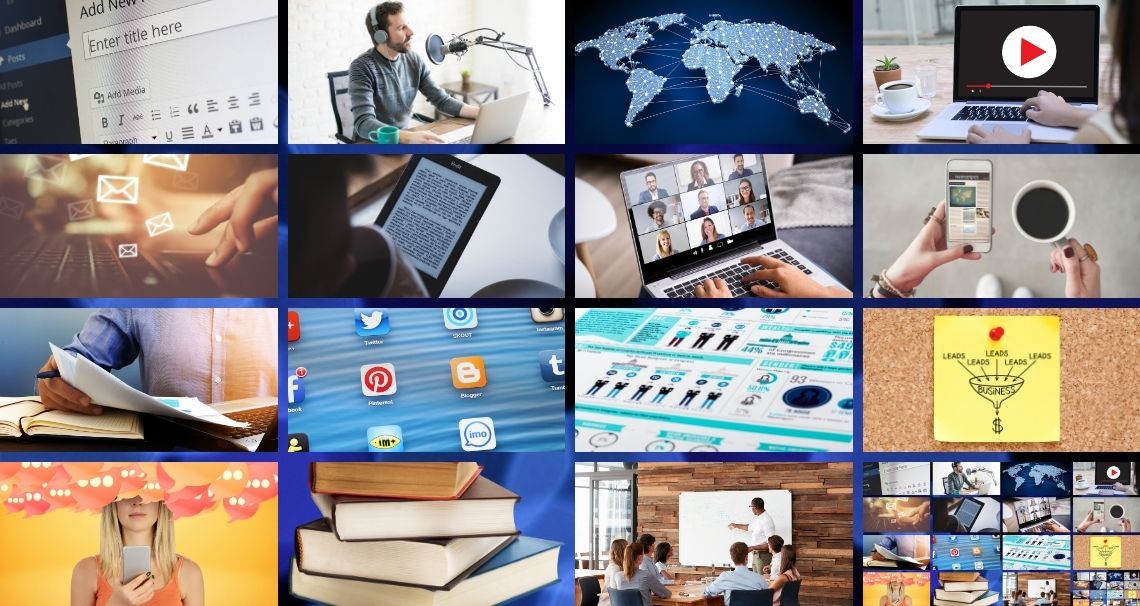